Governments execute a wide array of tasks in modern societies, from maintaining infrastructure for traffic and water management, via providing health care and education to providing national defense and safety. With the exception of a few tiny countries like the Vatican, countries tend to have multiple levels of government to execute these tasks. For instance, The Netherlands has municipalities, provinces and the central government, and additionally police regions, water boards and other regional organizations focused on a specific task. What these different levels of government do exactly, differs from country to country. In this blogpost I will discuss why we have different levels of government, and what level of government should execute which task. These two topics lie at the core of what is called ‘fiscal federalism’, a topic on which I will publish more posts in the future.

One important reason we have different levels of government is that different people may have different preferences for what service level they want and what services they expect from their government. For instance, people in one area may love ice skating, and in another they might love football. Building football stadiums everywhere clearly is not the best strategy. Building an ice skating ring in the first area, and a football stadium in the second will make more people happy. The same can be said for the preference for using your own car versus using public transport. In the countryside there is plenty of space to use your own car, so this is often the more convenient option. In busy cities traffic would end up completely congested if everybody used their own car. Public transport can prevent such congestion, so public transport is a good investment for the average taxpayer living in a city.

Of course, in real life people are never perfectly sorted into different areas based on their preferences. However, there is evidence that people move to localities that have policies that match their preferences. This is a second reason we may want multiple levels of government. If people do not like their current local government, they can move to a place which they like more. So called ‘voting with the feet‘. This can also help to keep a government in check: if it tries to tax too much in return for too little, citizens will move, which will in turn reduce tax income. In response to this, the government may reduce taxes, or in anticipation of it, the government may never raise taxes too high

Additionally, when there are multiple local governments, citizens can compare their performance. By looking at how other local governments are doing, they can answer the question: ‘Am I getting value for money with my current government?’ This is so-called yardstick competition. Based on this information, they can vote politicians out of office who do not perform well enough. We may also want to have many local governments with different policies, because this leads to experimentation with policy. When the entire country has the same policy, much fewer policy options can and are tried. Local governments are our policy laboratories.

Ok, why do we need a central government, then?

However, not all tasks should be executed at the local level. For some tasks it is simply so much cheaper to execute them on a massive scale, that it is better to have a very cheap one size fits all policy, than to have many expensive choices. For instance, levying taxes requires intricate knowledge of people’s income and property. Imagine having each municipality having to build their own database for tax purposes. This would be extremely expensive, having one centralized tax service doing this once is clearly superior. Economies of scale are at play when the price per product decreases as you produce more products. However, perhaps it is possible to make decisions on service provision locally, while the production of these services is done by a higher level of government? Then we could maybe have the best of both worlds.

Another reason for executing tasks at the central level is if there are clear negative or positive externalities for producing a certain good or service. For instance, maintaining a theatre is expensive and requires subsidies from the government. However, theatres are located in one municipality, but benefit the entire region. The municipality with the theatre may not want to bear the burden of providing a theatre that is big enough for the entire region. This means there is an undersupply of theatres. In this case local decision making with production done by a higher level of government is not going to solve the problem, because local decision making would still not take into account the preferences of citizens outside the jurisdiction.

Taxation and redistribution of income are also tasks which are typically executed to a large degree by the central government. This is because when taxes increase in one locality, people and businesses tend to leave another locality. Remember voting with your feet? Moreover, with the way economies work some areas will be richer than others. To ensure a basic living standard, including sufficient healthcare and education, you may need to transfer resources from the richer areas in the country to the poorer areas in the country. 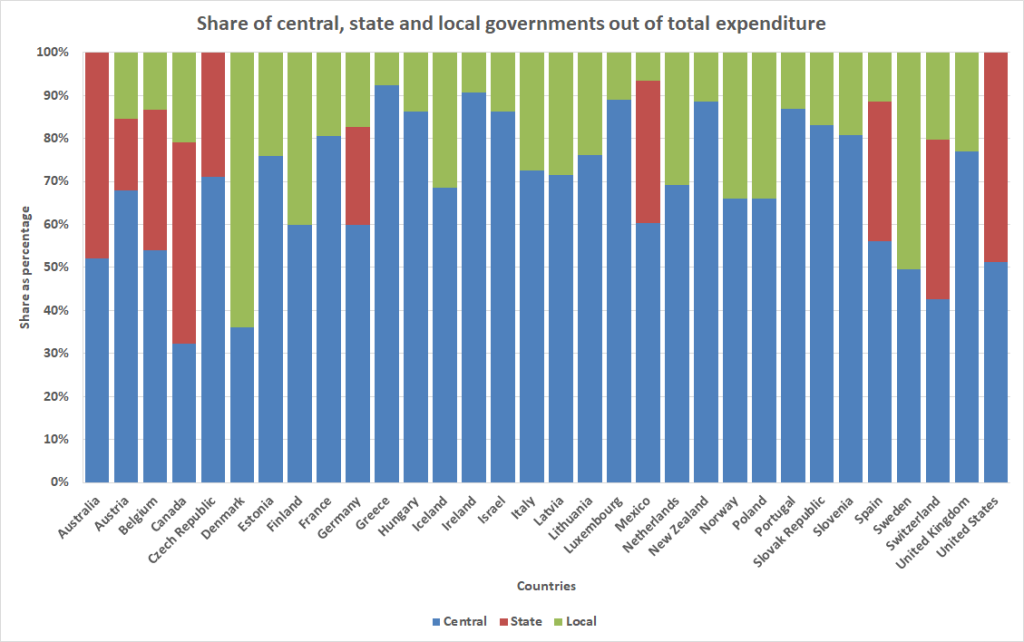 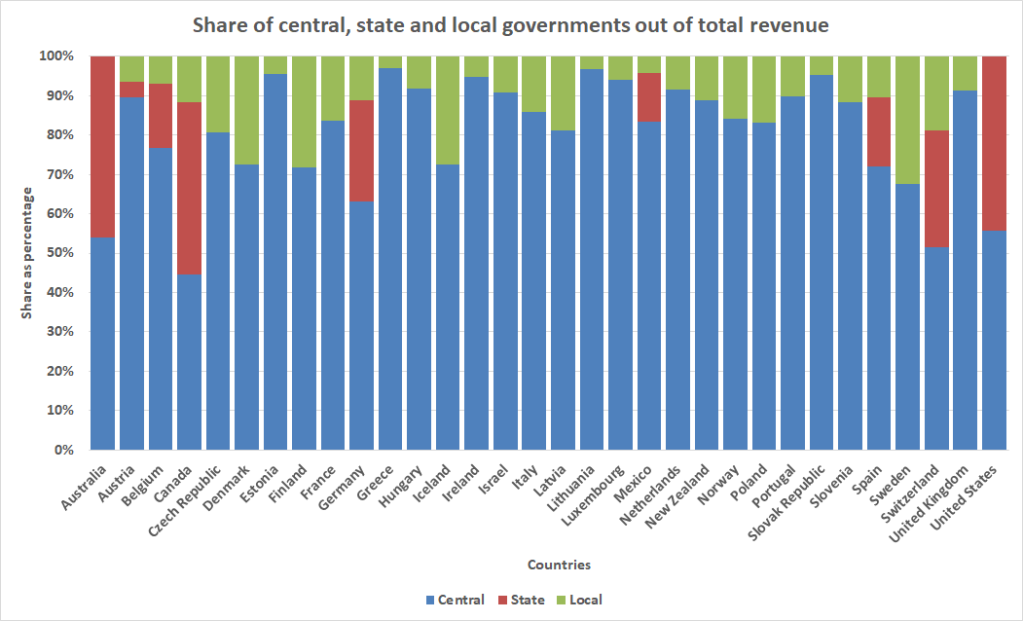 One thought on “Governments are like onions (or: Fiscal federalism 101).”